Free healthcare, free welfare, free social security – these are the cornerstone of the entitlement state, ergo, the word entitlement.  Something you get because of a classification government has proscribed to you – sick, poor or retired.

We asked a woman that supported the Affordable Care Act, who covers the cost of the ACA?  She paused, thought a moment, then simply said – I don’t know.  Then it was suggested the government was paying and, in a sigh of relief, she responded affirmatively.  But in the next breath, she was asked where was the government getting its money?  Puzzlement again swept through her.

The point is that all these “free” programs have to be paid for from private taxpayers as – and here is the revelation for some – the government has no money of its own, only that which it taxes from the people and that which it borrows (that also must be paid back by taxing the people).  So, as we write in Vigilance The Price of Liberty, politicians have developed a pay-off scheme to take from some to give to others, with the government comfortably in the middle to take its cut.  Ergo, nothing is free.

More immoral, is the inevitability of political corruption.  What could be done for a dollar in the private sector takes a figurative $10 of waste and fraud in the public sector.  This is immoral because the government coercively takes money from taxpayers to redistribute to tax takers without regard for efficiency or efficacy.

But what of the mantra that society has a responsibility to care for the poor?  That the problem of the poor is too large for charity alone.  That there is a social injustice when some have too much and others have too little.  Thomas Sowell in his book, Wealth, Poverty and Politics, quotes the economist Henry Hazlitt who wrote of poverty:  “The real problem of poverty is not a problem of “distribution” but of production.  The poor are poor not because something is being withheld from them but because, for whatever reason, they are not producing enough.”

#bevigilantbefree
Posted by Be Vigilant. Be Free. at 12:47 PM No comments:

Talking to a Brick Wall

Talking to a political partisan is like talking to a brick wall.  Someone who chooses to be ignorant and disregards or selectively picks facts and history to those that only support their view.  But partisans are not alone.  Far too many of us have strong conviction about our political beliefs that we disregard fact and logic when engaging in political “discussions” and drawing conclusions.  We have spoken about the substitution of feeling for fact in previous blogs, as well as in our book Vigilance The Price of Liberty, but this problem is so pervasive and destructive to a free society that a light must be shown upon it repeatedly.

Until people cast off the cloak of political correctness and unbridle themselves from beliefs that cannot be adjusted by fact and logic, we will be forced to live in dangerous ignorance as a society.  And the consequence of ignorance is that we will continue to elect bad politicians and incur bad policy that will plague our nation now and for generations to come.

To secure the blessings of liberty for ourselves and our posterity, as our Founders sought to do, we must tear down the brick walls that inhibit honest debate, and become vigilant.

#bevigilantbefree
Posted by Be Vigilant. Be Free. at 4:04 PM No comments:

The Most Modern Political Thinking

The great philosopher Socrates said “The secret of change is to focus all of your energy, not on fighting the old, but on building the new.”  In 1787 a group of men assembled to construct the greatest political document of mankind.  It was the most modern of political thinking that drew upon all the thousands of years of governments before it.  These men realized the greatness the country could attain with the right form of government that would protect individual liberty.

The document they created enabled the country to change the course of the world.  It brought prosperity never before experienced by so many.  It lifted billions of people from abject poverty and the drudgery of daily life to education and free time – a concept largely unheard of.  The people of the country became exceptional and, when given the most powerful military, sought not to use it to conquer but to liberate.  This country is America and its document the Constitution.

However, most of her citizens consider the Constitution out dated.  Something to be interpreted for “modern” times or just irrelevant.  But since 1787 there has been no successful “modern” political thinking than that expressed in the Constitution.  Political movements of collectivism expressed as socialism, communism and Marxism have all proven insufficient, unsustainable or simply abject failures.  These are the old and past failed political philosophies.

Which is why we question how Americans so often revere the Constitution at the same time they remain ignorant of it?  Why do we let politicians trample upon and disregard the Constitution?  Why do we forsake our civic responsibility and allow ourselves to be played for fools?  Why do we ignore the hundreds of years of history and make the same mistakes?

It was these questions that lead us to write Vigilance The Price of Liberty to help us remember who we are, where we came from, and why we are the last best hope for liberty and prosperity.  Please join us in restoring that document that remains the most modern of political thought and let us not turn back to the failed old ways of despotic collectivism.

#bevigilantbefree
Posted by Be Vigilant. Be Free. at 2:01 PM No comments: 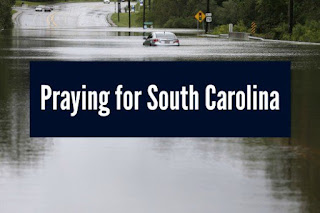 In the recent days South Carolina has experienced severe flooding and the efforts to support those that have lost so much has been incredible.  Keep the positive thoughts flowing toward residents of this State and the flood waters flow out.
Posted by Be Vigilant. Be Free. at 4:19 PM No comments:

"Tear Down This Wall" 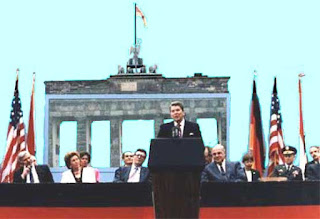 The US Vigilance team had the distinct pleasure of meeting Peter Robinson, one of the speech writers behind Ronald Reagan’s famous Berlin Wall speech in 1987.  It was an incredible story of how this speech took form and the road to its delivery by President Reagan.  Mr. Robinson expressed how the President’s words made ideas thinkable and things say-able.

The idea of the speech was so provocative that some 18 months later the infamous Berlin Wall would fall and the Soviet Union would begin its rapid dissolution.  The greatest experiment in communism crumbled under the weight of liberty and free markets.  The prosperity brought under the U.S. Constitution that enabled each individual freedom of choice proved superior to a despotic system where choices are made by the State.

The mere fact that words can be so powerful should be a testament against political correctness.  If words are the keys to thoughts and discussion, what is the implication for the lack of those words?  We devolve into the Soviet Union.

When you say it, you think it.  When you think it, it becomes reality.  If words become controlled by the State or media, our thoughts become limited and our reality shrinks.

We must let our thoughts be free as expressed by our words.  We must not let ourselves be subjugated and our expressions confined, punished or suffer retaliation because they were not politically acceptable.

The words “political correctness” should be an affront to every American.  To make words “political” is by its definition to control us.  Tear down the walls of discourse and tell us what you think – agree or disagree – it is the openness of our discussion that is a barometer to our freedom.

#bevigilantbefree
Posted by Be Vigilant. Be Free. at 1:07 PM No comments: