Self Esteem Vs. Self Confidence

During this presidential election cycle, we are reminded of the commentary by historian Forrest McDonald on the results of the 1998 mid-term elections, as recounted in the Wall Street Journal, Notable & Quotable, on January 25, 2016:

[There] can hardly be room to doubt that the nation has undergone a grave decline in its moral standards. Relativism and permissiveness have won; “sensitivity” toward the behavior of others, no matter how despicable, has won; the notion that self-esteem is more important than achievement has won.

McDonald is correct, that when the focus is on how others feel, then freedom is trampled.  Elevate self-esteem over accomplishments and sniveling self-centered children are the result.  Self-esteem, by itself, creates a false sense of worth that translates to the individual’s sense that he is owed something.

Responsible men are created when they succeed AND fail.  When they suffer the trials of hard work and risk.  However, when they are provided from birth the notion that they are “wonderful” and everyone gets a trophy for showing-up, they are left with a sense of entitlement.  Yes, they have self-esteem from doing nothing, but they do not have self-confidence from having accomplished something.  Without self-confidence, an individual does not have the internal fortitude to make difficult decisions in business and life.
Posted by Be Vigilant. Be Free. at 11:53 AM No comments: 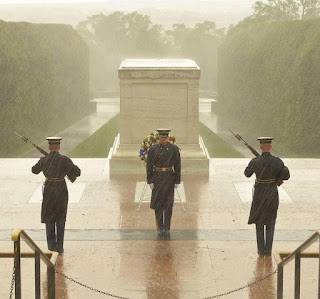 In the middle of the large winter storm that pummels the East Coast this weekend, there are men of our military who stand vigil to pay honor and respect to those that have made the greatest sacrifice so that we may enjoy the blessings of liberty.  To this we have the background of presidential elections that, rather than showing the best candidates, show only those that appeal to the two greatest sins of man: avarice and ambition.  No great General like Washington, no leader grounded in the value of freedom like Reagan, and no stirring visions like Kennedy.

The lot of candidates are reprehensible to American freedom.  None who would place their hand on the Bible to swear an oath to protect and defend the Constitution have any intention of doing such.  Their intentions and actions will all be for political expedience and the next election cycle.  But who can blame them as the general electorate is ignorant of the civics needed to protect and secure their own liberty.

The Democrats have fielded a geriatric batch from the far left, while the Republicans have a three-ring circus of the Urinary Olympics.  The Democrats prodded Bernie Sanders, who was not a Democrat, to run as a Democrat against their inevitable nominee Hillary Clinton, to push her further left – as if she was not extreme enough already.  At least Bernie honestly believes in the value of socialism where Hillary simply utters the phrases that she believes will get her elected.  In some fashion, Bernie is less repulsive as an honest lunatic than Hillary as a practiced liar.

Bernie calls himself a “socialist” to hide that he is a full-throated communist.  All his ideas can be found in the dung heap of history.  Even the Communist Chinese realize a modicum of capitalism is needed or their country will return to crushing poverty and mass starvation – Bernie has not yet received this memo.

The original meaning of socialism was where the people owned the means of production.  But that was a failure, as punctuated by the collapse of the Soviet Union.  Socialism morphed from controlling production to controlling society by the distribution of wealth.  For Bernie and Hillary this means taxing everybody, not just the wealthy, then distributing the income through their idea of what is fair.  This is known as tyranny, when the state coercively takes your earnings then determines the choices you can make – like Obamacare.

However, both parties are staunch supporters of socialism and, we should point-out that America is the largest socialist nation in the world . . . what?  That is correct.  Think Social Security, Medicare, Medicaid, Obamacare, welfare, etc.  What the government calls “entitlements” is socialism – doing through the “collective” what can be done by the individual.  And all these entitlements are both unsustainable and destroying the financial fabric of the country.  Just Social Security and Medicare have over $100 trillion unfunded liabilities.  A staggering amount that puts every American on the hook for over $320,000 - that is for every man, woman and child!

So when you hear the words socialism or entitlement think of government doing even more of what is not working and then tax us more for it.  And all the while politicians will tell us that taxes are “investments” and more government spending breeds “prosperity” – without any proof of history.  The call of “fairness” means taking from those who earn their living to give to those who do not.

Americans have a sense that we are in decline and headed in the wrong direction.  We must choose wisely, for the next decade will determine if America remains a beacon of liberty and prosperity.  Take heed to the solider pictured and remember: if we do not demand a well-managed government and fidelity to the Constitution, we will lay waste to the great sacrifices that have been made in our behalf. 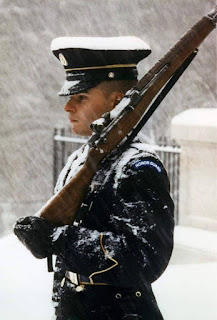 Master of the Obvious

Robert Doar, a Fellow at the American Enterprise Institute and former commissioner of Human Resources Administration of New York City, writes in the article, The Big but Hidden U.S. Jobs Problem, published in the Wall Street Journal on January 12, 2016 “I am not an economist, but one likely reason for the dismal labor force participation is that many U.S. assistance programs act more like work replacement than work supports.”  He cites work by Casey Mulligan, University of Chicago economist, which “concludes in response to the recession, several U.S. safety-net programs changed in ways that discouraged employment”.

It is with delight that Mr. Doar, now in private employment, realizes that government programs that he once administered create dependency as a choice of life style.  Poverty programs have far less to do as a safety net then as enabling clear minded and able bodied people to make rational calculations about the level of effort they wish to expend.  For example, we recount in our book, Vigilance The Price of Liberty, of a mother with two children who “was working part-time for $19,000 a year in Harrisburg, Pennsylvania, and receiving assistance benefits of nearly $82,000 a year from federal and state governments. Now compare this compensation to the taxpayers with a median household income of about $50,000 for a family of three in 2012.  In other words, more can be made on welfare and part-time work, in certain instances, than honest full-time work.”  This was a rational decision on her part and the woman candidly admitted that the “welfare system it sucks you in . . . and it is hard to get out of.”

The woman’s choice of welfare stems from a lack of pride to do for herself, and of virtue to be willing to take the earnings from those who do work, then blame the system for sucking her in.  Then there is the system itself that allows this to happen without regard to the immorality of it. As Benjamin Franklin commented:

I am for doing good to the poor, but I differ in opinion of the means. I think the best way of doing good to the poor, is not making them easy in poverty, but leading or driving them out of it. In my youth I travelled much, and I observed in different countries, that the more public provisions were made for the poor, the less they provided for themselves, and of course became poorer. And, on the contrary, the less was done for them, the more they did for themselves, and became richer.

After 50 years and $15 trillion of welfare replete with fraud, waste and abuse, the rate of “poverty” today is about where it was in 1965 when the war on poverty began.  It seems that one need not be the Master of the Obvious to recognize it is time for a change.  What do you think the change should be?
Posted by Be Vigilant. Be Free. at 12:32 PM No comments:

Let Me Tell You Something I Know Nothing About

The world renowned climatologist, John Kerry, who is also Secretary of State of the United States, spoke about Climate Change on February 16, 2014 in Jakarta, Indonesia:

I know sometimes I can remember from when I was in high school and college, some aspects of science or physics can be tough – chemistry. But this is not tough. This is simple. Kids at the earliest age can understand this.

Try and picture a very thin layer of gases – a quarter-inch, half an inch, somewhere in that vicinity – that’s how thick it is. It’s in our atmosphere. It’s way up there at the edge of the atmosphere. And for millions of years – literally millions of years – we know that layer has acted like a thermal blanket for the planet – trapping the sun’s heat and warming the surface of the Earth to the ideal, life-sustaining temperature. Average temperature of the Earth has been about 57 degrees Fahrenheit, which keeps life going.

Imagine the Secretary of State who struggles with “science or physics” is lecturing “kids” on the “simple” understanding of climate change by wrongly describing the thin layer of Ozone in the atmosphere as the thermal blanket of CO2.

Even the president of the United States, also a man who proclaims “not to be a scientist”, is down-right convinced of global warming by man-made activities, so much so, that he thinks this to be the greatest danger facing mankind – not terrorism, a nuclear equipped Iran, national debt approaching $20 trillion or $100 trillion of unfunded entitlement liabilities.  All these problems will not deter the president from his quest to “heal” the planet.

If there is man-made climate change then it has yet to be proven.  Science demands that its models have accurate predictions and, as yet, the predictions from the models have not been accurate, let alone that they conclude the cause of warming is due to man-made injections of CO2 into the atmosphere.

Whether it be climate change, net neutrality or Obamacare, all these have become reasons to rule vs. govern.  We are told that government needs to act in our best interests and, as in the Wizard of OZ, please ignore that man behind the curtain.

All these self-proclaimed intellects deem themselves above us all so it reminds me of an old-time Vaudeville sketch that sums their proclamations to us:


I come before you to stand behind you

To tell you something I know nothing about.

Pay at the door.

Sit on the floor.

In the spirit of ringing-in the New Year, let’s evaluate the upcoming presidential election.  It has become habit for people to be enthralled by the circus acts we call “presidential debates” and the mud-slinging ad campaigns.  However, to receive better from our politicians, we must demand better; and to demand better we must become better ourselves.  So in light of the New Year let us make a resolution for political self-betterment.

To do this we must learn how to demand a well-managed government.  Visit our website www.usvigilance.com to find many of the tools you need to be better informed on civics and a better citizen.

As we remain the beacon of liberty, the United States should hold their political leaders to a higher standard.

#bevigilantbefree
Posted by Be Vigilant. Be Free. at 2:55 PM No comments: