With the release of Al Gore’s sequel to, An Inconvenient Truth, we thought it noteworthy to discuss, well, science.  According to far left MSNBC commentator Chris Hayes, on his show, All In With Chris Hayes, the debate is “over” on climate change as 97% of scientists agree on man-made climate change.  Hayes leaves no doubt that this is 97% of all “credible” scientists; i.e. any disagreement is for those not credible.

Now, there may very well be a material and measurable influence of man’s activities on global warming and climate, but real science requires proof of this hypothesis, not name calling or legal action to prevent those who disagree from speaking.

Proving Einstein’s theories required brilliant and extremely accurate experiments to measure the predictions that Einstein’s equations proposed.  Only when there was independent verification of the accuracy of predictions did we believe the science behind the theories.  We do not have this when it comes to climate change.

Chart 1 below shows temperature fluctuation over the past million years.  For the particular latitude indicated on the chart, there are wide swings.  The last uptick began about 10,000 years ago when the best man could muster was barely a camp fire.  However, we are now asked to believe that the only cause of global warming is man. Yet, if all these dramatic swings occurred without man, then to what degree is man causing them now? 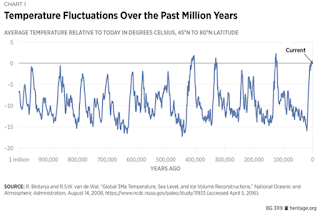 Climate debate is welcomed, as we are the stewards of the planet and should keep it in good stead.  Our course must be with reasoned and fact based discussions remembering that when we ask for public policy, that it must be well defined and limited.
Posted by Be Vigilant. Be Free. at 2:54 PM No comments:

Freedom: Our Most Precious National Treasure

We have spoken on the idea of freedom time and time again. In the research of our book, Vigilance The Price of Liberty, among the questions asked to people of different backgrounds, gender and socio-economic levels, was "what is liberty?". All had a common definition that liberty was the freedom to choose. This concept of liberty and freedom is abstract, but not for Vice Admiral James Stockdale.  He was a prisoner of war for eight years in Hanoi, Vietnam after being shot down in September of 1965.

In the years following his release, Vice Admiral Stockdale did much writing and speeches in regards to his experience as a POW.  An article titled Freedom: Our Most Precious National Treasure (the title used for this blog), was published by Parade Publications, Inc. on June 29, 1980. Vice Admiral Stockdale reflects on the average American who experiences freedom as an abstraction, while he, after spending time in a prison without such freedom, grew to understand freedom having a "delicious and tangible" meaning.

Below is an excerpt of the article that we hope will bring light to freedom to make its value more an appreciated and dear gift, rather than an unchallenged entitlement.

[M]y appreciation of its [freedoms] preciousness stems from a first-hand understanding of its rarity. The void of freedom in other parts of the world - and particularly the passivity with which this lack is accepted - is staggering to a man who is born and raised free. In my Hanoi cell, I found myself daily picking up shocking signals in that milieu of deadened sensitivities. Like these:

-The routine feedlot attitude of the simple peasant guards who delivered daily food rations down the line to cooped-up humans, fowl and livestock, with expressionless unconcern for the continual darkness, suffocating closeness, and isolation in which the chickens, pigs and men were confined.

-The continuous barking of loudspeakers on the street telling the people of Hanoi what to think.

-The pathetic ignorance behind outburst of a prominent political cadre who shouted to me in a moment of exasperation: "We may not have freedom, but after 4000 years we have order, and we will settle for that."

We, as Americans, should not settle for ‘order’. We, as Americans, must fight to keep our freedom and ensure that sweet liberty for our posterity.
Posted by Be Vigilant. Be Free. at 2:41 PM No comments:

"We the People" are the words that begin our Constitution and signifies the government deriving its limited power from that granted by the People. So how has it become “we the people" who seem serving of the politicians?  The wording of the Constitution has not changed, yet the twisting of its words have left our political system revolving about power-hungry politicians.

We were a country born of great men. Men that put the will of the people and the good of the newborn nation before their own. Debate was for the purpose of finding resolve and extracting the best possible solution.  Leadership was not a prize to be won, but a duty if so conferred by the people. So how did we become a nation led by self-serving politicians whose goal is gaining and retaining power?  Where public policy is merely a pawn to score political points in the battle to be elected?

We elect what we deserve, thus, as we have said many times before, we must demand better of our elected officials. Our taxes should not fill hollow promises and programs of generational theft, but rather put towards effective and efficient policies that promote the public good and not a politician’s election.
Posted by Be Vigilant. Be Free. at 1:18 PM No comments:

Bob Woodson is a black man who was a civil rights pioneer.  As president and founder of the Woodson Center, he argues that today’s violent protests from the Left defame the legacy of the civil rights movement that they purport to revere and defend. His short interview on Fox News, Tucker Carlson Tonight, which aired on July 7th, provides insightful commentary.  He highlights that the civil rights movement of the 60's promoted inclusion vs. modern protests that promote the opposite.  A most worthwhile interview to see.

The Shame of Charity

There are roughly 74 million people on Medicaid - some 23% of the population.  Medicaid is supposed to be a safety-net program for poor women, children and disabled but, under the Affordable Care Act, it has been the dumping ground for the able-body to gain medical insurance.

Medicaid had 4 million enrollees when launched in 1966.  Since then, the population has grown 63%, while Medicaid enrollment has grown 1,738%.  How can this be?  Have Americans’ dependence upon government been growing at an accelerating rate?  So much so that today that 1 in 4 cannot provide medical insurance for themselves or their families? No.  The answer lies in the transfer from those that do, to those that do not, couched first as compassion and later as a life style.

Left-leaning political commentator, William Galston, wrote in the Wall Street Journal Opinion section on June 28th regarding the Senate Republican proposed healthcare legislation that cutting “public support for health care by $1.2 trillion over the next decade means depriving vast numbers of Americans of health security.” For Galston this means “people would be forced to rely on the kindness of strangers.” In Galston’s view, voluntary charity from strangers is antithetical to coercively taxing strangers to take from those that can take care of themselves and give to those who either cannot or chose not to care for themselves.

For collectivists like Galston, the purpose of welfare is not a temporary helping hand, but about a wealth transfer from the few to the many.  After all, collectivists are, by nature, collective.  It is about the many and not the individual, who need be relegated to a larger purpose.

The Democrats gave the nation Obamacare, and the Republicans have shown, so far, little to materially change toward free-market healthcare.  The measurable difference between the two party’s plans is that the Republicans throw less federal taxpayer money at Medicaid than Democrats.  However, the basic underlying notions of actuarial sanity and free market forces that drive the price dynamics, quality, and availability remain largely absent.

There is pride and self-satisfaction in earning one’s living and pursuing happiness as each individual dreams.  It is the cold and grey world of tyranny when government and political elites rally to conform people to dependence on government.