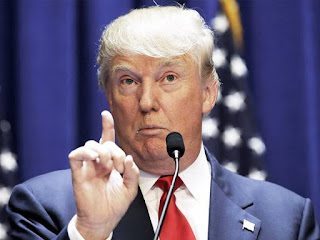 Politicians spew vitriol at each other while pandering and lying to voters.  It is no surprise that politicians are held in low esteem.  The Donald however, has succeeded to engage people’s anger at politicians and government.  He has blown through political correctness and makes people feel free.  That is, he is someone who says non-pc words then will not apologize – that makes him come across candid and honest.  Whether or not he is.

Political pundits keep deriding him and await his flame-out.  But the pundits have failed to realize what is going on.  The more they deride Trump the more the voters like him.  The correlation is that Trump has provided voters a way to express their resentment of politicians and media.

So when will Trump devolve?  Or maybe the better question is, when will the public do something unexpected?  Answer: when they feel empowered, and The Donald is giving voters a sense of empowerment.  By deriding politicians as stupid, by telling people that he can change what they hate so much about government – incompetence and waste - The Donald is bringing voice to the frustrations of the many Americans.

Are voters just shouting a message to politicians through The Donald that they are fed-up with business as usual, or is The Donald a representative of the voters?  It is too early to know, but for now The Donald has brought more eyes to politics very early in an election cycle.  Whatever you think of him, the attention to politics is what we view as the path toward a vigilant public.


#bevigilantbefree
Posted by Be Vigilant. Be Free. at 12:55 PM